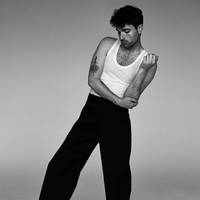 As a kid growing up in Hellevoetsluis, The Netherlands (pop. 40,049), Duncan Laurence found solace in the healing power of music. Holed up in his bedroom—hiding out from the bullies that tormented him at school for his love of singing, his interest in theatre, and his desire to make art—Laurence sang, taking the darkest moments in his life and turning them into a light he could spread to anyone who was willing to listen. “I tried to create this world inside my room, writing songs, where I could turn mistakes into beautiful things,” Laurence says.  With his debut full-length, Small Town Boy, Laurence makes his younger self proud, writing the next chapter in a story that, despite moments of pain, despair, and loneliness, has led him to the realization of a singular vision dense with love, hope, and perseverance. The songwriter and producer paints his album’s cinematic atmospheres with a number of textures—the rich instrumentation of alternative rock, the delicacy of folk, and the dynamic, catchy swells of contemporary pop—to craft his grand vision. And throughout the LP, his powerful, expressive tenor flows from a gentle whisper through fluttering falsettos to a full-blown force. But the scope of the music never overpowers the intimacy of the stories Laurence tells. For example, the understated “Beautiful” opens Small Town Boy with the thrum of acoustic guitar as Laurence pays tribute to the unconditional love between himself and a confidant.