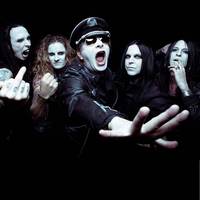 This is the new date for the show of DEATHSTARS planned for the 26th of May 2021. All tickets remain valid for this new date. We thank you for your understanding and hope to see you soon at the Rockhal.
—
DEATHSTARS were formed in Strömstad, Sweden in 2000 – born of a variety of influences ranging from black and death metal, to rock ’n’ roll and industrial. They’ve released four full-length studio albums to date; Synthetic Generation (2003), Termination Bliss (2006), Night Electric Night (2009), and The Perfect Cult (2014). The band has stated that Synthetic Generation was a bit of an experiment and challenge, the members all having come from underground extreme metal bands, which was more familiar territory at that point.Termination Bliss garnered the group immediate attention, the band touring with Cradle Of Filth in 2006 in its wake – whilst follow-up Night Electric Night launched them internationally, lauding them enormous praise and landing them a tour with Rammstein in arenas throughout Europe. Latest album The Perfect Cult saw them continue their impeccable run – welcoming their first ever North American tour, and sadly the departure of Cat Casino, who has now returned to the fold.